The Wildlife Garden in December 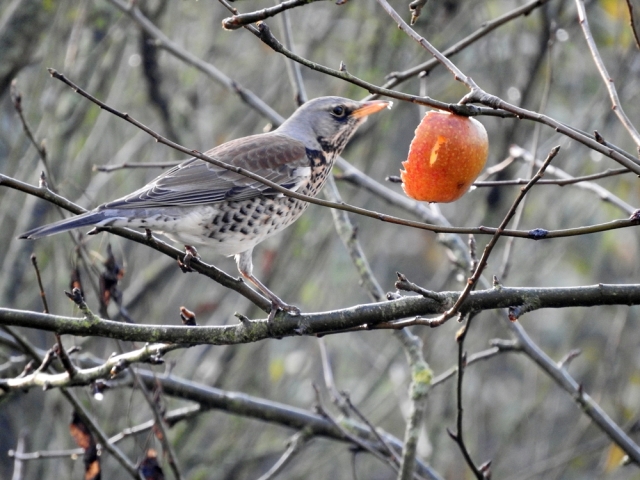 The weather was cold, frosty and bright at the beginning of the last month of the year which meant that there were plenty of fieldfares in my orchard feasting on apples. On the second day of the month a wonderful bird visited the garden – a woodcock. This bird has been seen in our garden a couple of times before for a fleeting stop over, and is always a joy to see. As the week progressed numbers of fieldfares in the orchard increased to about fifty, all concentrating on eating as many apples as they could in the shortest possible time! They were accompanied by six male blackbirds and there was a great deal of aggravation between these two species. On the 3rd of the month our first siskin showed up. I doubt we will reach the numbers we had last winter when more than sixty of these lovely little finches were counted here, but I will keep my fingers crossed for a few more as the winter progresses. Other unusual birds for us that came to feed in the garden were a couple of house sparrows which are rarely seen here. The redwings all seem to have moved on from our area having stripped from our trees the berries that they particularly relish – hawthorn and holly.

Through the second week of December the weather became more changeable. Temperatures were milder which was good, but it was also extremely windy and still incredibly wet everywhere – the garden was like a bog with the ground completely saturated and nowhere for the excess water to go. The natural pond in the field next to my garden was

completely full and the overflow was unable to cope with any more water, meaning that my vegetable garden was flooded. As a result of these conditions bank voles were very active here as their runs were obviously under water. Several voles were seen collecting up and hurrying off with sunflower hearts from under the bird feeders close to the house. Overnight on the 7/8 th a very windy, violent storm swept through South Shropshire and conditions continued to be wet, windy and cold for the next week. There was still no sign of redwings with only a handful of fieldfares feeding on the apples as the weather slowly warmed up a little. A single treecreeper was seen regularly on the old apple trees at the back of the house, searching for insects in the crevices of the bark with its long curved bill. On the 14th heavy, wet snow fell in the evening and the next morning the Long Mynd was white – a beautiful sight from our windows.

The third week of December continued cold and bright. Lots of small birds were feeding frantically on the feeders and there were several male blackbirds in the meadows and around the orchard, but only a couple of females. A few chaffinches and greenfinches continued to pick up spilt food from under the feeders but sadly no bramblings were seen in spite of an influx in other areas. Both a male and a female siskin appeared on the 18th and a female sparrowhawk was seen in the garden on the 19th sitting in one of the orchard trees. Yet more rain fell towards the end of the week and garden, having dried out a little, again became completely marshy with water from the pond next door still well into the vegetable garden. Several pheasants appeared to be living permanently in the garden, feeding on the seeds falling from the bird feeders even though a slightly milder spell of weather meant that there was probably plenty of food for them in the adjacent fields.

As we approached the end of the year, and on the very day of the winter solstice, a song thrush was heard singing – only a few tiny phrases but enough to lift the spirits! Wet weather continued for a few more days and after last month’s narrow escape my office did eventually flood, as water percolated

down through the sodden fields behind us and into lower levels of the house. The office eventually dried out after the wooden floor was taken up and thankfully there was no damage to furniture, or more importantly, books!  Still, signs of the spring to come were now in the air with the local song thrush singing every morning from the oak woodland next door. A pair of red kites displayed around our local fields and over the garden during the day and we began to hear tawny owls hooting at dusk every evening. The drier weather continued to the end of the month and beyond thankfully, and milder temperatures and lengthening catkins on the hazel made me think foolishly perhaps, that winter had gone.

I am a plant ecologist, specialising in wildlife gardening for more than 30 years, writing books and teaching. My blog is about the two acre wildlife garden I have created in South Shropshire.
View all posts by Dinchope Diary →
This entry was posted in Birds, Ecology, Gardening, Nature, Shropshire, Uncategorized, Wildlife, Wildlife Garden. Bookmark the permalink.